I thought I would share a couple special projects I completed over the last month.

The first was something my husband wanted done.  He has a group he golfs with on a regular basis.  There is a it of rivalry between them.  They have two teams of four.  Last year his group was going to have shirts designed. I designed a cartoon for them to use. Unfortunately, the shirts were never made.  This year, he went to investigate cost and decided there had to be another way.  He asked me if I could do something.  I made my cartoon smaller and found matching golf shirts.  I transferred the design to the shirts and then stitched them.  We decided to go with just the black outline to keep it simple and so I could complete them quickly - there were four to do.  Here is a picture of the shirt: 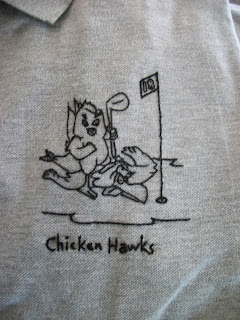 The second project is tatted.  I needle tat.  I had some friends ask me over the past few months if I was going to make anything for The Duke and Duchess of Cambridge for the birth for their first child.  I have sent The Queen ornaments for Christmas and recently a sampler for the jubilee. Since I hadn't done any tatting for a bit, I thought I would make a bonnet.  Here is a photo of the bonnet: 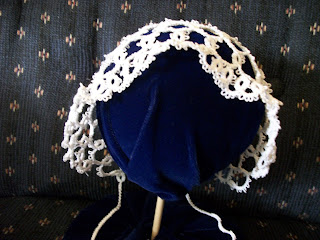 I will be sending it this week.  I will let you know if I receive a reply.


Before I go, I would like to wish all dads a Happy Father's Day tomorrow!